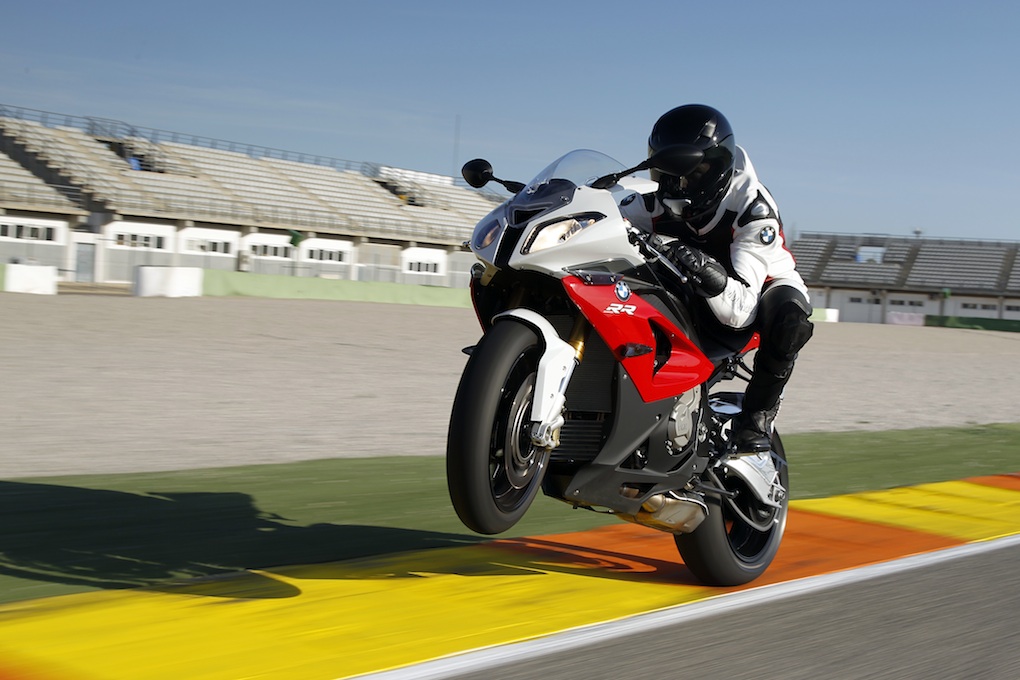 Scarcely two years after the launch in 2009, BMW Motorrad is now presenting the revised model of this successful supersports bike, now with many optimised details. The primary objectives were even greater riding precision and agility, a punchier power buildup, and a more sensitive response. The revised model of the S 1000 RR has incorporated quite a few feedback reports from national super stock races. 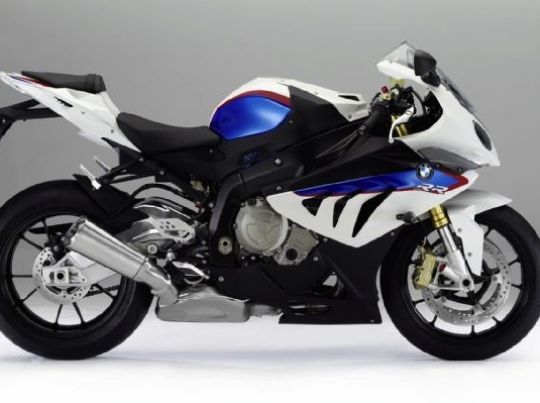 Like its predecessor, the new RR knows no compromise, providing the highest level of sporting character and riding dynamics. The convincing features of the new S 1000 RR are its improved handling with absolute riding stability, supreme engine performance with perfect everyday practicality, and a resounding dynamic performance. The highest level of active safety is safeguarded by the most advanced brake system today on the market, the BMW Motorrad Race ABS. When accelerating, the rider is supported by the Dynamic Traction Control system DTC. Both of these systems have been optimised for the perfect interaction. 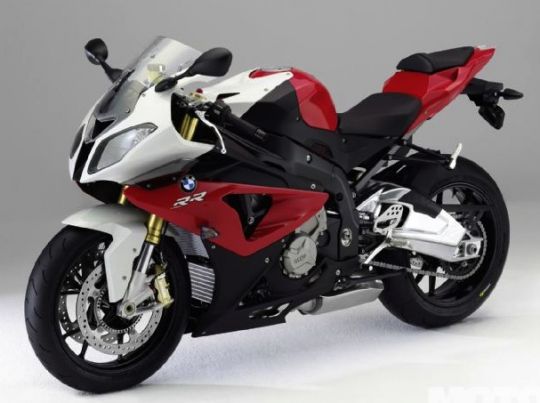 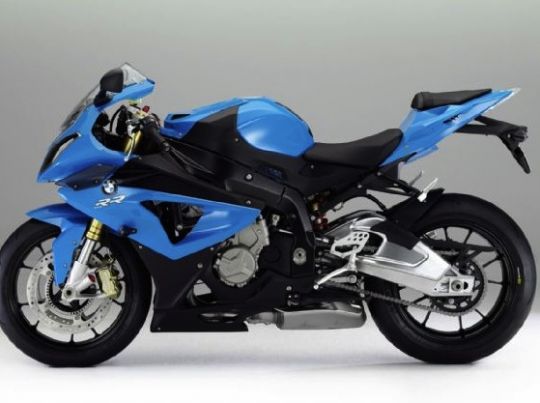 One of the primary objectives pursued for the revised S 1000 RR model was to improve ridability by boosting thrust and enhancing the linearity and harmoniousness of the power and torque curves. The reconfigured throttle improves overall response.

Suspension with improved handling and feedback. 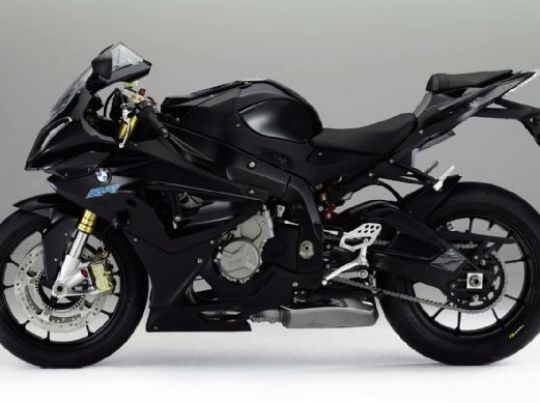 The modifications to the new RR suspension have been instrumental in boosting its riding dynamics. For instance, the upside down fork and the spring strut feature a new internal structure, providing an even wider range of damping forces from comfort to performance.

Moreover, the suspension geometry has been modified with new values for the steering head angle, offset, position of the swing arm pivot, fork projection, and spring strut length to yield even better handling, steering accuracy, and feedback for the new S 1000 RR. This has required modifications to the main frame that also included enlarging the cross sectional area of the intake air guide through the steering head for greater air flow efficiency. This package of suspension optimisations is rounded off by an adjustable mechanical steering damper. 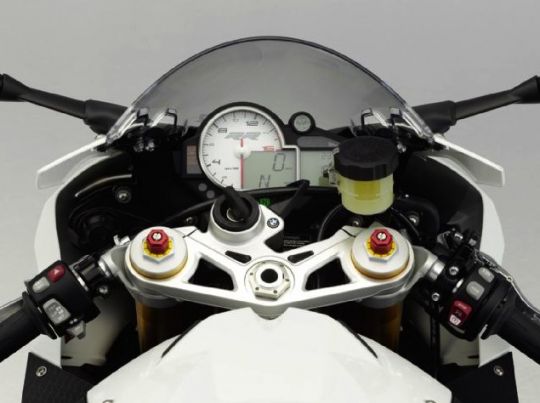 The engine speed display has been redesigned for better readability. In addition, the display can now be dimmed and provides more functions. For instance, the lap timer can now present "Best lap in progress", and if required, "Speedwarning" can inform the rider when he exceeds a particular speed.

The new S 1000 RR not only benefits from the advanced developments for the engine, suspension, and cockpit. It has also gained yet another step ahead in terms of design. The tail section now presents a considerably leaner look. There have been some discrete changes to the asymmetrical side panels, and the centre airbox cover now sports side aperture grilles. On the top part of the panels, a new, telling identifying feature takes the form of two winglets that enhance the aerodynamic qualities.

In the most sporting colour combination of Racing red and Alpine white, the RR exudes power and speed even when it is stationary, whereas plain Bluefire lends it a decidedly extravagant look.

Additional visual accents take the form of wheels painted in glossy black and the red spring in the central strut. The matching swing arm either presents an anodised coating or is kept in black.

Also the ergonomics has been improved in the form of new heel plates for the rider. The stabilisers on the passenger footrests have now been designed for a leaner look. 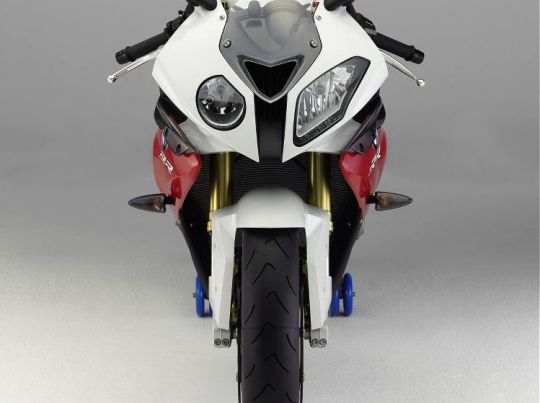 For individualising the new S 1000 RR, BMW Motorrad is expanding its range of optional extras and special equipment ex works with a number of attractive features. Riders with a particularly sporty bent can now equip their RR with an HP titanium exhaust system (with or without ABE) or the HP race data logger. Also the heated grips offering two levels and fitted as optional extra can take the bite out of the early morning run on the racetrack or longer rides in cold weather.

The new features at a glance

• Expansion from two to three performance curves (one each for Rain and Sport modes and an additional one for Race and Slick modes); Rain mode now 120 kW (163 hp).

• Revised spring elements for an even wider range of damping forces.

• Forged and milled fork bridge in a new design and with a smaller offset.

• Revised design with a leaner tail section, redesigned side panels, centre airbox cover with side aperture grilles, and winglets.